The Modest Man: How Brock McGoff Has Grown a Fashion Blog for Men to $30k a Month 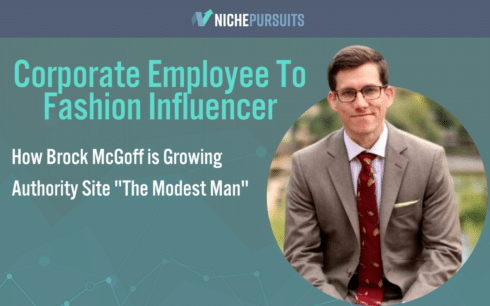 How to look taller and leaner? Should men wear makeup? How to keep your shirt tucked in? These Youtube videos are generating The Modest Man millions of views!

Brock McGoff owns the website FullTimeBlog.com a site which documents his experiences growing a blog. His site TheModestMan.com now generates over 400,000 visitors and $30k in revenue per month.

Looking back through my old emails, I connected initially with Brock back in 2012 when he started.

Over the years of building websites, Brock has learned a lot.

Including getting hit by the first Google Panda update taking his traffic down to virtually zero.

Since then, Brock has made every effort to make sure a Google penalty would never happen again and only aims to build content and links that he is genuinely proud of creating.

So how does someone go from a corporate employee to a fashion influencer?

The Inspiration for The Modest Man

It started by solving a problem.

Brock is only 5’6″, and looked young compared to his corporate colleagues. By taking the time to dress professionally, he found he could gain more respect.

He encountered the problem that no matter how much money he spent or research he did, finding clothing advice that would fit and look good on his 5’6″ build.

He knew that millions of others were encountering this same issue, so he started the TheModestMan.com as a way to document his findings and share his clothing experiences with others.

Learning how to dress well and earn passive income converged to create a significant income for Brock. Eventually, the site went from a blog to a larger authority site.

Today, the site has morphed into a general men’s style and confidence platform.

In the last year, Brock has double the site traffic. In our podcast interview, Brock uncovered the primary steps he took to make this happen. Here are just a few of the major things Brock is focused on.

Since they were so different, he shouldn’t be handling them the same.

Brock gave the example of one way he is doing this by changing titles of content depending on the platform.

For a recent watch review article, he shows the minor changes he makes.

Youtube Title:
Is This Really the BEST Watch Under $100? | Seiko SNK809 Review

The subtle difference significantly impacts what gets clicked by optimizing for clicks in Google Search or on Youtube.

Hiring a Manager for Sponsored Posts

As Brock has put himself on the map as an influencer, he was getting quite a few sponsored posts requests.

His influencer deals were not coming from the influencer marketplace sites. Sites such as Brandbassador and Invocial are typically more suitable for micro-influencers or Youtubers looking to get free products.

Brock wasn’t looking to get free products, his influencer deals were coming from agencies or large brands that would bring along unique stipulations and requirements such as YouTube view counts.

Each deal and brand is a bit different. These deals take a lot of time and work but are profitable.

For a dedicated video, a brand would pay The Modest Man anywhere from $4-6k for a few minutes of visual content.

A non-dedicated 60-second ad at the beginning of one of his YouTube videos, Brock would charge approximately $2-3k.

These were significant margins and were a perfect way to help monetize his 300,000 YouTube subscribers, but it took a lot of work.

Everything You Need For a Sales Funnel FREE 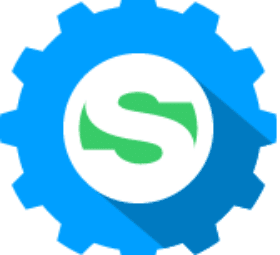 90% of all System.io features don’t cost anything. Free Account Includes:

Check Out the Systeme Review Here!

Even with so many followers and monthly views, YouTube ad revenue was only generating about $1,500. The Sponsored video posts were a great solution.

Hiring a manager to manage the brand sponsorships allowed Brock to focus on what he was great at and build great content instead of exchanging emails and negotiating deals.

We didn’t get too much into the details of his arrangement with the brand manager, but it sounds like they work on a commission structure aligning the two nicely.

On Brocks blog FullTimeblog.com he shows that in Q3 $18,243 was generated from Sponsorships alone.

Focusing on Keywords and Affiliate Income

Early on, the majority of the content Brock was creating for The Modest Man was all informational content.

The informational content was great for driving traffic, but he knew he was leaving a lot of money on the table when it came to affiliate revenue.

Adding in buying guides to the type of content he was creating helped grow revenues.

Even with the unfortunate Amazon commission reduction, Amazon Affiliate links brought him in over $16,000 in Q3. 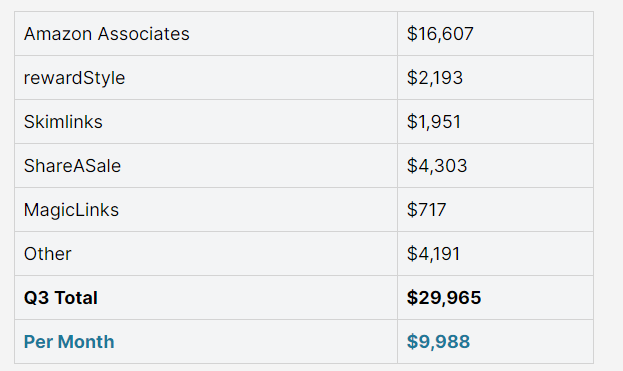 Creating the guides is only half the battle. It’s choosing the keywords which make the buying guides work.

Brock invested more time into using tools like Ahrefs to identify keywords. His favorite metric to monitor is the number of ranking keywords.

When Brock finds a great keyword, he will only create the content when he knows he can do better than the competition.

A perfect example of this is when the competition created lots of listicle articles stuffed with affiliate links.

The Modest Man, with the help of a few writers, is now consistently publishing two articles per week, and keyword research is planned nearly three months ahead of time.

Taking the time to go back to old posts feels like a hassle, but it continues to be proven worthwhile.

I know Brock isn’t wrong. I’ve been doing some of the similar tactics he has, such as fixing broken links, images and updating content to make it more relevant for the Niche Pursuits brand. The effort is also paying off.

The typical post is about 1500 words. For higher competition keywords, The Modest Man posts get up to 5000+ words.

Understanding The Modest Man content silos and what he wanted the site to be known for became a priority.

One example he found was that content on watches was doing well. By focusing on what was doing well and then expanding on them, traffic came easier.

If a post for the Best Watch Under $100 was gaining traffic, creating other posts in the different tiers for Best of $500 or $1000 also likely would do well.

It was almost like he was a miner. When he found a vein, he would dig deeper and broader to mine all the traffic he could.

The architecture created opportunities for overlap in the content silos.

For example, “Watches for small wrists” may have low search volume, but when visitors landed on the page, they would be delighted with 15 other articles they would be interested in reading.

What’s next for Brock?

Brock has had 4-5 brokers reach out to him just this year, offering to purchase his site. He’s interested in selling his website and putting plans in place for a sale in the next 12-18months.

Brock plans to still hold onto his YouTube channel and plans to only sell the blog.

With success in both YouTube and his blog. So if starting over again or starting new, what is Brock’s advice?

Look at what you enjoy. Do you enjoy talking in front of the camera or do you prefer writing?

If you like the aspects of becoming an internet celebrity, Youtube is probably your option. Brock says if you prefer more passive income, focusing on an SEO blog is perhaps a better option.

Brock has a great eye for visual content and creating valuable content. I am excited to see what comes next after a sale of The Modest Man. If you want to learn more about Brock and his work, you can check out his blog  Fulltimeblog.com or TheModestMan.com

Podcast 121: How to Grow a Niche Site Once It’s Making a Few Hundred Dollars a Month

Podcast 150: How Jonathan Kiekbusch Went from PBNs to White Hat SEO and Has Grown a Thriving Business

Podcast 12: Running a Landscape Business Like a Tech Company!

Podcast 13: How to Effectively Use Content Marketing to Grow Your Business with Marcus Sheridan

Podcast 94: Spencer and Samara Coaching Call 5 – How to Make Your Niche Website Stand Out

How OnlineDivorcer.com Grew to 17,000 Unique Visitors a Month Using SEO Strategies in a Competitive Market

A 6 Figure Exit and 10,000 Downloads a Day: Nick Loper’s SEO and Business Strategies for Growth