The very first public project that I conducted on NichePursuits.com was my attempt at building an iPhone App!  I did indeed build an app, and it worked well for a short period of time.

However, the app eventually had some technical difficulties that made it an unattractive business.  At the end of the day, I let it fail.

I learned quite a bit going through this project, brainstorming for ideas, hiring a developer, and getting something sold on the app store.  I’m sure my next iPhone app will be much more successful due to this experience, and hopefully you can learn a great deal as well!

One of the Original Updates:

I have been working on getting my iPhone App developed for the past few months.  I am happy to say that I have basically a completed version that I have been testing out for the past week or so!  As I’ve discussed previously, the app will allow users to check their Google Adsense earnings and has a cool little feature associated with that.

I am in the process of getting approved to the Apple Developer Program.  Since I am applying under my business entity (as opposed under my personal name), the process takes a little bit longer.  I expect to be approved in about a week or so, then I can submit my App for approval!

Anyway, I made a quick video to go over the latest and to give a LIVE DEMO of the app!  Well, kinda.  I open up the app and show it off briefly, but I don’t give a full demonstration – more just to show that it does exist 🙂 .

And of course, I threw in some music with the video to make it a bit more interesting.  And yes, I haven’t shaved for a few days.  Oh the life of an internet entrepreneur!

I would love to hear your thoughts and comments.  Thanks!

I think its time to close the chapter on my iPhone App case study.  I began this public project of building an iPhone app over 2 years ago.  In fact, it was the original, “niche pursuit” on my blog here.

Essentially, I allowed everyone to vote on a small business idea that they would like to see me pursue publicly.  You can see the original post and survey results here.  So, 2 years ago, I decided to build an iPhone app.  I completed the App about a year ago. You can read all the posts leading up to and post creation of the app to catch up.

I learned a great deal through this process, but today I’m ready to give the final update.  I have removed the app from the app store, and its no longer for sale.  I want to share the losses associated with this venture, and why I’ve closed this business venture.

A Quick History of the AdAlert iPhone App

I was very excited to try building an iPhone app, because I had read the success that Pat Flynn, Benny Hsu (listen to my podcast with Benny here), and many others were having in the iPhone app business.  I had no experience in this area, but I decided to hire an iPhone app developer to complete the programming, and I would be the idea and business man behind the project.

I also knew there was  a TON of competition on the Apple App store, so I wanted to create a “niche” application (sound familiar?).  One where I could be the top dog in a small market – yes, just like my niche websites.  I also wanted to create something that I found useful.

So, I created the AdAlert App.  You can see what the app is all about right here.  Essentially the app allowed users to quickly check their Google Adsense earnings.  But the unique feature of the App, was that it would make your phone play a sound automatically each time you earned a certain amount in Adsense.  So, if you set your app to go “cha-ching” every time you earned $5, it would do so hands free.  I gotta say, I loved the app…as did others!

What Happened to the App?

Well, the app was selling okay for the first month, but after about 5 or 6 months, I took it down from the app store.  The reason?  It stopped working properly. Let me explain…

The app was programmed in a way that the user input their Google Adsense details, and the app would query their Google Adsense account approximately once an hour to see if a new earnings target had been achieved.  All of these queries to Google were processed through my server.

As the number of users grew, so did the number of queries all going to Google from my 1 IP address.  As a result, it wasn’t long before Google actually blocked my IP address from performing these queries.  Because of this, the app was no longer able to send the sound notifications…which was its primary selling point!  Ughh.

So, I worked with my developer to try and resolve, but it became clear that even if we added more IPs, etc – we would continually be playing cat and mouse with Google.  And rather than invest several thousand dollars more trying to figure out how to “fix” the app, I decided to pull the app from the App store.

Income/Loss Report for the App

In addition, part of the reason I decided NOT to invest in fixing the issue, is because it was clear that I didn’t have a huge winner on my hands.  Let me break down the profit and loss of my first (and only?) iPhone app venture.

My AdAlert iPhone app cost me, $2,880 to develop.  Not a huge investment, but not chump change either.  I found the development team on Elance.com, and overall I was happy with their work.  However, the issues that came along were something unexpected, and they couldn’t find an easy fix. 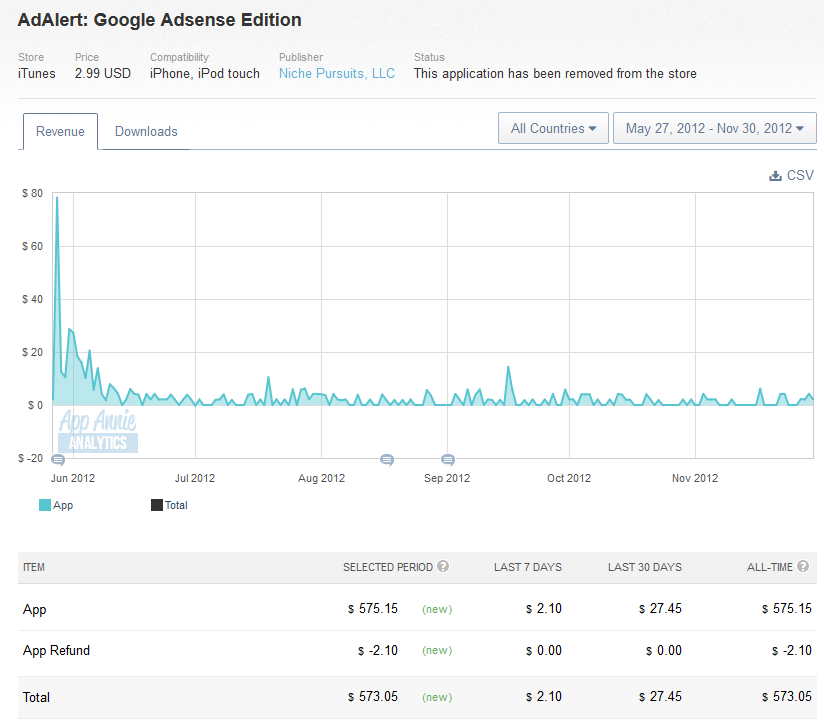 Here is what the sales looked like the first month or so. 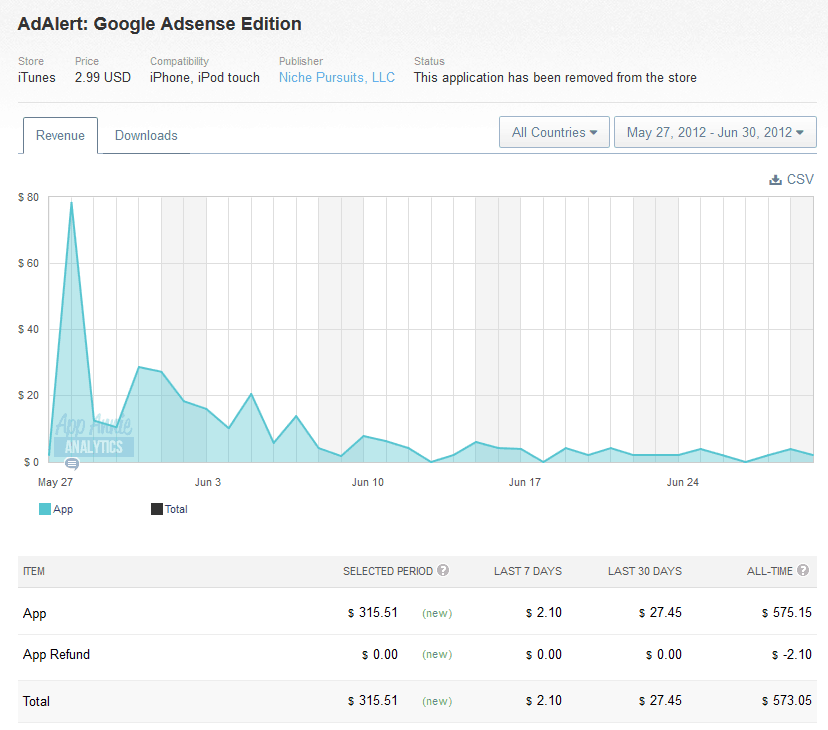 So, most of the sales came in the first month: $315.51.  However, I also wanted to show what a more “typical” month would be.  So, here is a screenshot from the month of July. 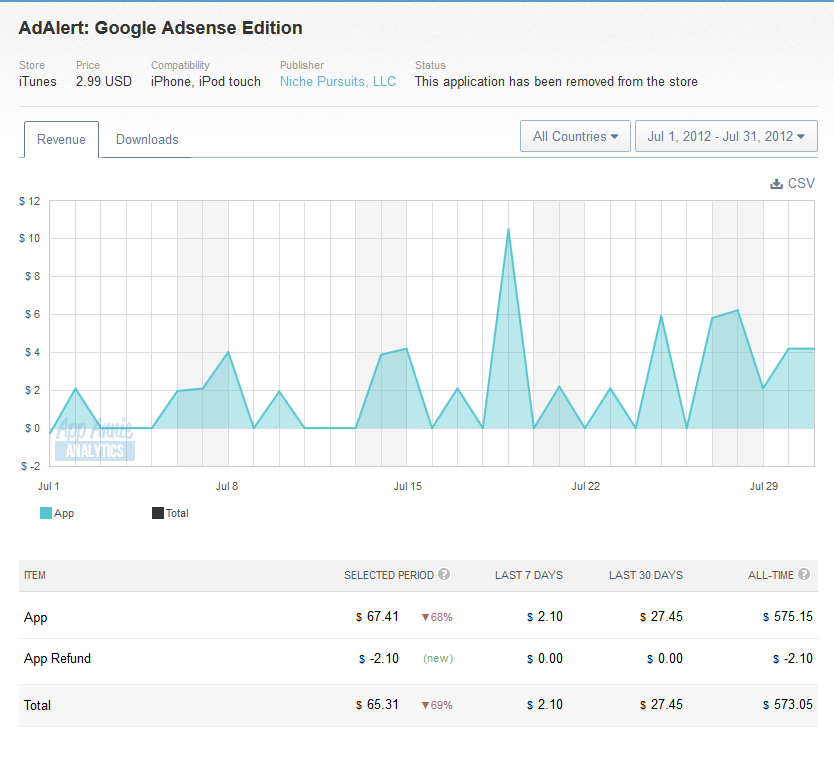 The app sold $65.31 worth.  So, I likely could have expected to sell around $65 to $70 per month of the app without any additional promotion; or about $800/year. I believe the sales were mostly coming internally from the app store at that point.

However, if I would have continued to promote on my blog and perhaps in other locations, I likely could have gotten the average sales volume up to $200 a month.  That’s just a guesstimate; but as you can see – even if it was making me $200/mth, it would have taken over a year just to make my money back.

Because I could see that I would likely have to invest another couple of thousand dollars to get the app working properly again, and I could see that the sales were not going to be stellar, I just let the application go.

In hindsight, I could have done several things differently and learned other things with my first iPhone app venture.

First, I could have done more research to verify that the app would function properly with a large group of users.  I will say in my defense, that I DID indeed do lots of research and had many back and forth conversations with a few different developers.  I asked specifically about the feasibility and functionality, and while some questions were brought up – the issue that eventually killed the app – was never one of them.

I was going into somewhat uncharted territory (at least to the app developers I talked with), so it was hard to predict all of the issues that might come up.

Second, I could have done more to promote my app.  I mentioned it on my blog, and that’s about it.  I actually had plans to do much more, but as explained, issues started to arise a short time after releasing the app; and therefore, I didn’t want to heavily promote something that I wasn’t sure was going to be around.

Third, while I do think that money can be made in the Google Adsense iphone app niche, I could have picked something with bigger market potential.  This is a tough one, because I am a firm believer that dominating a small niche is much better than being a nobody in a big niche.

However, it also quickly became clear that I was never going to make thousands a month with this app – and truthfully that was never the point.  I was really hoping for a few hundred dollars a month; more as a way to prove the concept.  Then I was going to go back and develop more apps.

While I don’t think I would ever recommend creating a game that competes with Angry Birds, etc – I think its important to do your market research and find a happy middle ground somewhere.  Find a niche that its not overly saturated, but also provides upside potential.

Finally, I learned that competing on the App store is a tough business.  Sure there are lots of success stories out there, but there are also many failures.  I interviewed Pat Flynn before I launched my app here, and he explained that he had close to 30 iPhone apps (if I recall correctly).

Overall, its hard to share a business failure so publicly.  However, I’ve learned a lot through the experience; so perhaps the loss was only financial.  I think its also important for me to be realistic and share that not every business venture is going to be profitable.  Most certainly I’ve had a few failures including this one.

But because I’ve been willing to take risks, and even fail, I’ve also found some great successes in business.  For example, I have 4 different ventures now that have all been very profitable for me:

I’ve had other failures in business, that perhaps I can discuss another time; however, overall the winners have FAR outweighed any looser.  The saying of, “no risk, no reward” really is true.

So, will I dive into creating iPhone apps again?  I don’t know.  The thought hadn’t crossed my mind until I read a post recently written by Sunil over at ExtraMoneyBlog.com, where he explains the exact steps and success he is having with a couple of his iPhone apps.  The business can be profitable, and perhaps I just need to try again.

If inspiration strikes, I just may go in for round 2.  I’ll keep you posted!

I would love to hear your thoughts, comments, or questions below.  Please let me know what you think!

Podcast 8: How to Launch an iPhone App with Andreas Kambanis

Thanks for sharing nice one!

Thanks for sharing your experience…I love your Long Tail Pro, I used it daily.

You’d need a developer, you’d place it on the app store, and then find a way to monetize