In the fast-moving world of entertainment and popular culture, a lot has changed since 2007. This was the founding year for Den of Geek in London by Simon Brew.

In five years, the site was licensed for the North American market by DoG Tech LLC, with a New York office set up.

Around the tenth anniversary of Den of Geek, DogTech LLC developed a joint-venture agreement with Dennis Publishing, although this only lasted for two years. Dennis Publishing disposed of its shares in the Den of Geek World Limited vehicle to Dog Tech LLC.

We wanted to see how the site does its thing to reach such heights though. So let's dig around and see what we can find.

How many People use the site?

According to SimilarWeb, Den of Geek enjoyed an average of 8.5 million visits per month between May and July of 2022, with more than 6 million unique visitors per month.

Who are the competitors of Den of Geek?

With Den of Geek proclaiming they are a site for entertainment enthusiasts, there is no shortage of competitor sites to consider.

Screenrant bills itself as “the #1 movie and TV news website”, and SimilarWeb states they welcomed 109 million visitors in the most recent month.

DigitalSpy is another highly ranked site in this field, with SimilarWeb listing the site as welcoming 33 million in the most recent month.

A site with a comparable level of traffic to Den of Geek would be AV Club, which welcomed 8.3 million visitors last month.

Den of Geek gets millions of visitors from organic search, which makes up anywhere from 38-79% of traffic heading towards the site (depending on where you look).

The site also enjoys a more significant proportion of overall organic traffic than their rival AV Club, which receives 26.65% of their total traffic in this manner.

While AV Club receives over 9% of total traffic through referrals and social media, the traffic Den of Geek enjoys from these sources is negligible. Direct traffic and organic reach are the leading sources for Den of Geek.

With so much organic traffic flowing towards Den of Geek, it’s clear they place a lot of time and effort into content strategy, helping it scoop up visitors from search engines.

There is plenty of evergreen content on site, with keyword terms like “best games of 2021” or “best sci fi movie” still delivering sizable traffic well into 2022.

However, the site also manages stay fresh and up-to-date, providing users with breaking news, reviews, spoilers and predictions on what will come next.

People love lists and always will

A simple post linking to their best films of the year so far has considerably out-performed the majority of their posts.

And they always manage to stay on top of popular topics in their niche!

Fans want to know what is coming next, which means devotees scour the internet looking for hints or predictions about their favorite streaming show, boxset or movie.

For instance, Den of Geek has benefited from the frenzy surrounding the fourth season of Stranger Things (although not to the extent that Kate Bush has) and the building excitement for the final season.

Native advertising systems or platforms found on Den of Geek, by BuiltWith.com, include:

Where do people go after Den of Geek?

The sites where Den of Geek sends most traffic to are quiz or gaming sites like Framed, Waffle Game, Heardle, Quordle and Worldle.

Amazon also ranks high on the list of sites which Den of Geek sends traffic to, emphasizing their affiliate connection.

The site also offers considerable ad space, including ads at the start of video content, banner ads and sidebar ads.

It's not intrusive though. And they also do a good job with their inline opt-in to join their mailing list:

As you’d expect from a site that welcomes so much organic traffic, Den of Geek is keen to understand the people who land on their site, where they come from, and why.

”We are thrilled to partner with Comscore to offer our partners a deeper understanding into who our audience is. We know our audience evangelizes about their entertainment choices and Comscore can help bring that to light.”

What Den of Geek Does Best

Pop culture sites are simultaneously in the moment and looking back to the past.

Den of Geek understands their niche and straddles these two elements well, cashing in on the latest frenzy and nostalgia.

Snappy reviews, previews and best of lists, allied to affiliate links, ads and games, ensure Den of Geek capitalizes on its millions of guests each month. 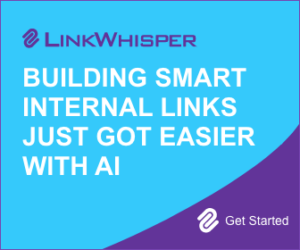